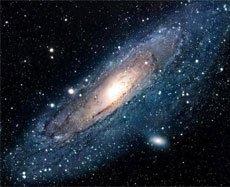 Radial migration of stars in the Galactic disk

The origin and importance of radial mixing of stars in the galactic thin disk are uncertain. At the sun galactocentric radius, stars move essentially on circular orbits around the Galaxy, but they may be shifted radially because of various dynamical processes (spiral arms). Two recent articles written by an astronomer from Paris Observatory reveal the imprint of radial mixing on the kinematics of stars in the solar neighbourhood, analysing several consequences.

One of these concerns the transition between the thick disk and the thin disk. The thick disk is composed of old stars of unknown origin. They could have been formed in the Galaxy, or have been accreted from a dwarf galaxy in the distant past of the Milky Way (more than 8-10 billion years). The abundance of alpha-elements as a function of metallicity (see figure) for stars in the solar neighbourhood shows that there exist a hiatus in metallicity between metal-rich stars of the thick disk (at about -0.2 dex) and metal-poor stars of the thin disk (at -0.8<[Fe/H]<-0.6 dex). Standard chemical evolution has difficulties to deal with this observational constraint : how can we explain that stars of the thick disk (old, and supposedly formed at an epoch when the metallicity in the Galaxy was lower) have larger abundances by a factor of 2 to 4 than thin disk stars ?

It is known that there exist a metallicity gradient in the thin disk : the stars formed in the inner or outer disk are respectively (in the mean), more metal rich or more metal poor than those formed in the solar neighbourhood. The analysis of the orbital parameters of the thin disk metal-poor stars shows that they probably come from the outer disk. Hence, the metallicity of stars at the solar galactocentric radius is significantly enlarged because of radial migration (from -0.2,+0.2 dex to -0.8,+0.6 dex). If we retain only stars that were formed at the solar galactocentric radius, the hiatus in metallicity is not apparent anymore. This result suggests that the parenthood between the two disks could be real, and that stars of the thick disk could indeed have formed in the Galaxy.

A second consequence is related to the correlation between the metallicity of stars and the presence of giant planets. Most giants planets have been discovered around metal-rich stars. Radial mixing implies that they originate from the inner disk. What is observed in the metallicity interval between -0.2 to -0.8 dex - where stars of the thin disk have supposedly migrated from the outer disk ?

In this interval, the majority (13 out of 14) of the stars with planet belong to the thick disk population or are intermediate between the thin disk and the thick disk. Only one star clearly originate from the outer disk. This contradicts the simple correlation between the presence of giant planets and the metallicity of stars. If metallicity is the only parameter controlling the presence of giant planets, we would expect a similar proportion of stars with planets in the thick disk and in the thin disk in this metallicity interval. Radial mixing offers a new way to envisage this problem. The question is now : why is it that stars with the highest fraction of giant planets come from the inner thin disk, and those with the lowest fraction come from the outer disk ? In other words, is there a parameter, other than metallicity, that depends on the distance to the galactic center and which controls the fraction of giant planets ? The statistics evocated above is arguably low and needs to be confirmed, but raises a new question.

Note : the metallicity measures the abundance of elements heavier than hydrogen and helium in the atmosphere of stars. It is given relatively to the sun own abundance. Alpha elements are synthetized in massive stars and have a nucleus, the mass of which is a multiple of that of helium (alpha particule). Ca, Mg, Si, and Ti alpha-elements have been used in these studies.