The day is lengthening, and the planet is turning more slowly on Venus !

Observations of the surface of Venus made using the visible and infrared spectrometer « Thermal Imaging Spectrometer » VIRTIS on the European space craft « Venus Express » are suggesting that the planetary rotation was slowing down gradually during the 1990s, when the planet was being scrutinized by the radar instrument on NASA’s Magellan spacecraft. A surprising discovery, to which have contributed, in particular, two scientists from the Paris Observatory.

A thick, dense and opaque atmosphere surrounds Venus, so that its surface cannot be seen from the outside in visible light. Luckily, in a few narrow infrared wavelength bands, the planetary surface can be discerned through the gaseous covering. From the very outset of ESA’s European Venus Express mission, these windows enabled the « Visible and Infrared Thermal Imaging Spectrometer » VIRTIS on the spacecraft, an instrument for which Pierre Drossart, director of LESIA1 at the Paris Observatory shares the responsibility, to make topographic maps of the Venusian surface. These maps can be compared to images acquired by NASA’s Magellan spacecraft during the early 1990’s and so identify, in principle, local thermal anomalies, or diffusive phenomena in the lower atmosphere. 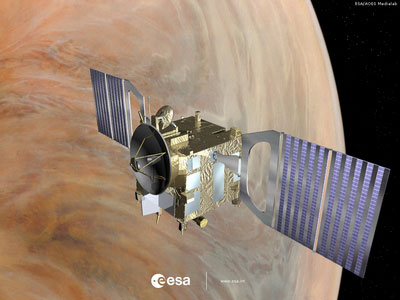 Venus Express has been operating in orbit since 2006
(ESA)

Surprise ! This work has shown that there is a slight discrepancy between the maps made by Venus Express and those made by Magellan. The difference between the images can be as large as 20 km. This result seems to contradict the hypothesis, deemed till now as eminently “natural”, that the rotation period of the planet has not changed since the very precise measurements made by Magellan about fifteen years ago.

The Magellan radar mission enabled the surface of Venus to be mapped using radio signals reflected from the surface. During the four years for which the scientific data has been available, the spacecraft has enabled the very slow and retrograde rotation of the planet to be measured. A comparison of these maps with the maps made by the VIRTIS spectrometer on the Venus Express spacecraft has shown that the maps differ by a small angle, even after correcting for the calculated rotation, and enables a new determination of this latter to be made, over a time scale of 16 years — the period between the two missions.

When the atmosphere rubs the ground

Once the various sources of error have been eliminated, these results can be interpreted as due to a change in the length of the day itself during the course of these 16 years. The observed difference is 6,5 minutes per day — to be compared to the length of the Venusian day, which is 243 terrestrial days, i.e. a relative change of 0,002 %. This figure is 50 times larger than the error in the measurement of the rotation period as made by Magellan, and can therefore be considered reliable. Furthermore, the observations made by VIRTIS/Venus Express are in agreement with recent radar observations made from the Earth.

The most likely explanation of this change involves the interaction of the surface with the atmosphere : this latter is so dense, that frictional forces can modify the rotation as a function of the wind and temperature distribution in the low atmosphere — the same effect does exist on Earth, but even when combined with tidal effects only leads to changes of the order of a millisecond per day.. Venus’ upper atmosphere rotates much faster than the surface, and so such frictional effects are particularly significant ; they could be responsible for the observed change in the period. Another feasible explanation involves a long-range exchange of rotational energy (angular momentum) with the Earth when these two planets are in conjunction. This measurement leads to an indirect constraint on the properties of the core of Venus : the larger it is, the denser and the more solid, the less the planet will be affected by this type of force.

Reference The scientific results are presented in the following paper Period of rotation of Venus estimated from Venus Express VIRTIS images and Magellan altimetry published in volume 217, n° 2, pages 474–483, in the journal Icarus in February 2012.